8th September 2017 · by Shabnam Wasim · in CafeScienceDundee, Past Events 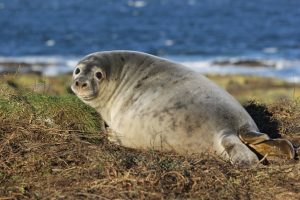 The world’s oceans are vast, covering over two thirds of the surface of our planet. It’s no wonder, then, that when humans have something to get rid of, they often toss it in the sea. Many people think that the waste just goes away because it gets diluted by all that water. Except that it doesn’t. Many pollutants that humans have flushed into the sea come back to haunt us. Some groups of chemicals don’t break down and stick around for decades or longer, with some pollutants from 1940s still found in our oceans and seas today.

Pollutants can be swallowed by marine animals and top predators like seals and whales receive the highest doses, which can have serious effects to their survival. This talk by Kimberley Bennett from Abertay University will explore health effects that long term pollutants cause in marine mammals, the latest findings on the dangers of these chemicals, and what can be done to avoid similar problems for humans and marine mammals in the future.

Join us at Café Science Dundee at Avery & Co. at 34 South Tay Street on Monday 9th October 2017, at 7pm. This is a free event and everyone is welcome. There is no need to book in advance but arrive early to avoid disappointment.

Brought to you by